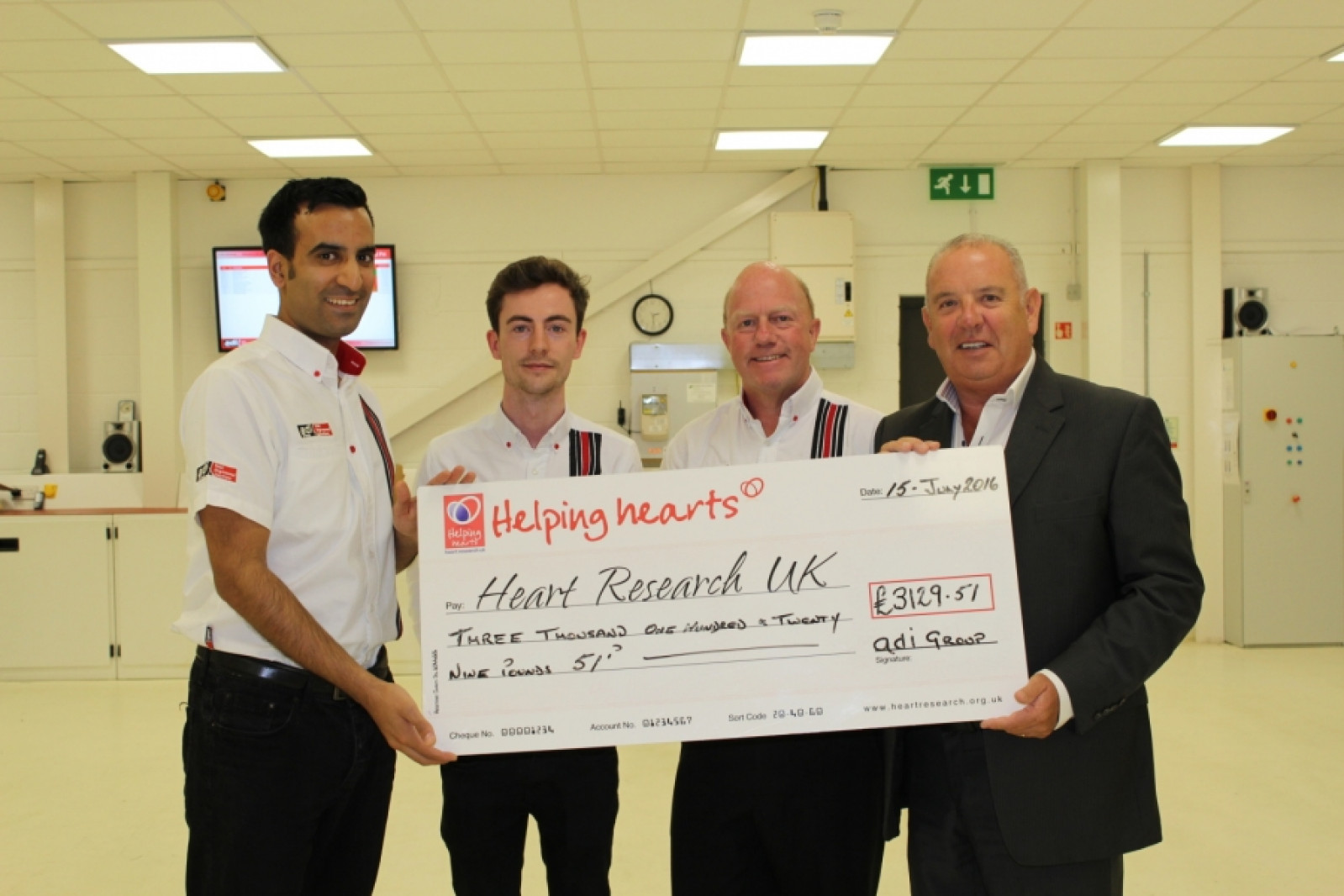 Engineering services company, adi Group, has raised over £3,000 to help hearts in the Midlands.

Founder and CEO of the adi Group, Alan Lusty was on hand to present a cheque of £3,129 to John Lloyd, Regional Manager of Heart Research UK in the Midlands.  The cheque presentation was made at the adi Group Limited head office in Kings Norton.  It follows a successful Charity Football Tournament, raffle and sweepstake hosted by adi Group, along with online donations.

Aston University played host to the charity football tournament, where 12 football teams from a wide variety of Midlands-based businesses took to the pitch, showing-off their football skills while helping hearts.  The skillful team from Deutsche Bank emerged as the eventual tournament winners following a thrilling penalty shoot-out with KPMG in the final.  The tournament attracted a large crowd of supporters, volunteers, and no-nonsense referees affliated with Birmingham County FA.

Speaking at the Cheque presentation, Alan Lusty thanked all the staff and volunteers involved in the charity tournament and outlined why the engineering services company choose Heart Research UK as its charity partner in 2016. Mr Lusty said:

It was fantastic to see so many teams get involved in this years event, and to see such a diverse representation from the Birmingham business community.  Heart Research UK is an exceptional organisation and we are pleased to be doing our part to support them as our charity of the year for 2016.

The partnership is an opportunity to help hearts in the Midlands, while also reminding staff to think about their own hearts, health and wellbeing in and outside of the workplace.

Our Charity Football Tournament is a particular highlight as colleagues and businesses  come together to relax, exercise and work together as a team while raising money for a great cause.

Id like to thank everyone who turned out to support us, all of the teams, the referees, our suppliers, the charity, and most importantly, all of those people who donated and helped make this tournament an amazing success.

While playing, and watching from the sidelines, some of the goals, saves and general play was exceptional this year.  Bring on the next one!

More than £8,000 has been donated by the adi Group to Heart Research UK in the Midlands so far this year.  The charity will use the money to fund medical research and community projects in the region.

We are grateful to the adi Group for their ongoing support.  The money raised locally will be spent locally, and we have funded a number of research projects at hopsitals in Birmingham, including Birmingham Childrens Hospital.

There was a great, postive atmosphere at the tournament.  It was particularly encouraging to see so many players taking part and being heart healthy.