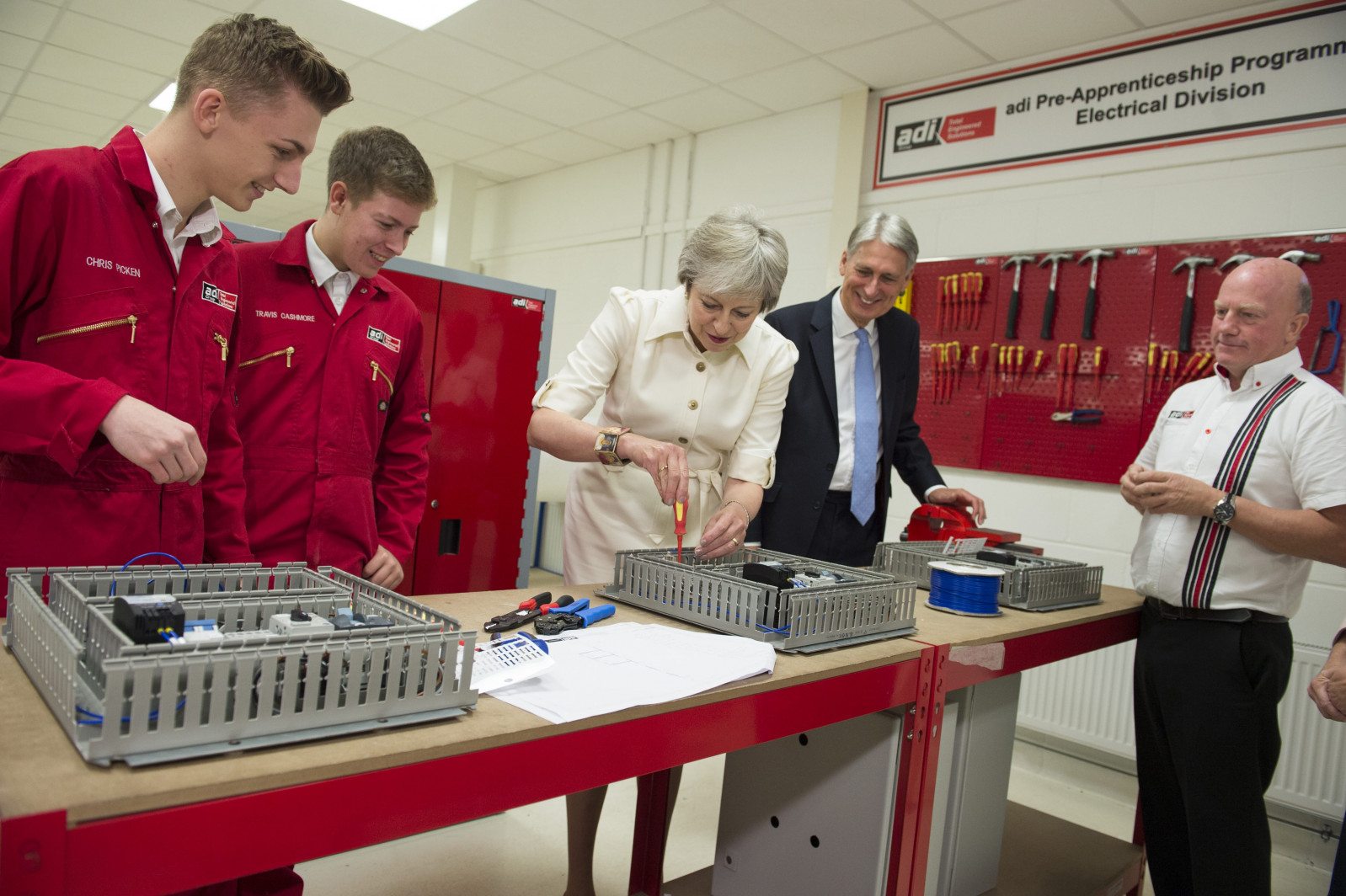 Prime Minister’s Question Time saw Theresa May shine the spotlight on Birmingham, as the importance of Apprenticeships were discussed. With bridging the UK skills gap high on the list of government priorities, attention was brought to the fact that annual investment in apprenticeships will double to nearly 2.5 billion by 2020.

With that in mind, Prime Minister Theresa May was accompanied by Chancellor of the Exchequer, Philip Hammond and Mayor of the West Midlands, Andy Street, to the Kings Norton headquarters of adi Group to highlight the multi-disciplinary engineering firm’s sterling work in inspiring young people to a career in engineering.

During her visit, Mrs. May tweeted her praise for adi’s “wonderful apprentices” and the opportunities delivered by the firm’s “quality apprenticeships.”

The group has enjoyed consistent growth since establishing in 1990 and has real ambitions for the next few years. Central to those plans are skills, with the firm recently welcoming 10 new apprentices, five of whom came from the business’ pioneering pre-apprenticeship scheme.

The Group has made a commitment by signing up to the 5% club, which states that it aims to employ 5% of its total workforce as apprentices by 2020. It is well on its way to meeting its target, with a current cohort of 25 full-time apprentices.

Welcoming his Downing Street visitors, CEO Alan Lusty explained why apprenticeships are so important to him and adi.

“Giving youngsters the skills they need for the world of work is vital, particularly at a time of such rapid technological change. And I’m a walking example of why. Were it not for an apprenticeship, this company and the jobs it has created wouldn’t exist.

I failed my 11 plus but was lucky enough to get on an Instrumentation and Electrical apprenticeship that really opened my eyes. It not only gave me some very important skills but it gave me the confidence and belief that my destiny was in my own hands.

That, in turn, allowed me to start this firm back in 1990 and build it from the ground up into what we are today. The discipline and resilience I learned all those years ago played a huge part in that, so I’ve always felt strongly about nurturing the skills of those who come after me.”

But that’s not the only way adi Group is taking skills seriously. Since 2016, the firm has run a UK-first pre-apprenticeship course, specifically designed by its team to give 14-16 year olds the opportunity to gain hands-on mechanical and electrical engineering skills and experience in a real world environment.

The prime ministerial visit to adi, attended by all 12 current pre-apprentices and 10 of the Group’s full-time apprentices, came ahead of the Chancellor’s keynote speech to conference, in which he announced a series of measures, supported by millions in funding, aiming to deliver a dramatic increase in the number of high-quality apprenticeships available to youngsters.

“To show both the Prime Minister and the Chancellor around our HQ is a massive plus and validates all the hard work of our entire team, so it’s a great boost for our already-high morale.
We like to think we’re pioneers, when it comes to skills development, so it’s wonderful to have our model held up as an exemplar by the government and to help, in some small way, shape the policy agenda. We also welcome the Chancellor’s conference comments and the commitments he’s made in support of apprenticeships like ours.

But it’s not only the responsibility of government. Businesses have a real role to play in inspiring young people and giving them the skills they need to succeed. To that end, our Pre-Apprenticeship programme has proof of concept and, if other companies copy what we have created, we can help bring about a sea change, not just in the engineering sphere but in a number of key sectors.

I can tell you, from personal experience, that inspiring young people as early as possible really works. So, I’d urge any businesses looking to make a difference to get in touch. We’d be very happy to pass on our concept and our knowledge of its delivery at zero cost.”